Although the Roots horn factory had been impressive, it was designed for the building of only one product, vehicle horns. From the moment we entered the factory where the Roots Team were building the Rosmech R6, I found the scene amazing. Several assembly lines were in process in differing portions of the enormous structure.

In the same building where the Rosmech R6 is being built are assembly lines for the small scrubbers, power washers, walk-behind sweepers, vacuum machines and more built by the Roots Multiclean organization. When I arrived at the portion of the building allocated to producing the Rosmech machine, there was a table on which about 10 metal panels were laid out, each perhaps 10×12 inches in size.

At first glance, all had been painted the same basic white color. However, upon closer examination, each was a slightly different color and several had slightly different finishes to the material. These, I learned, were there so the sweeper build management team could decide on the exact finish desired for Australia’s Rosmech R6 hoppers. 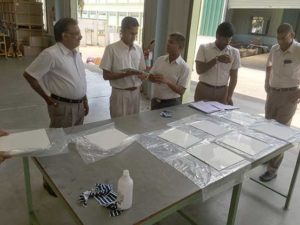 Throughout the sweeper build area were stockpiled the different components used for building the sweeper. Throughout, workers were performing their specific job functions in regard to putting together another R6. Rather than the feeling of ‘hustle/bustle,’ everyone was going about their business in workmanlike fashion at a steady pace. Perhaps this reflects the best overall work pace in a country where the heat is ever-present. However, I suspect that may also have to do with the mandate from Mr. Ramasamy, the company’s Chairman, that emphasizes quality of finished product as the stated goal of the company. 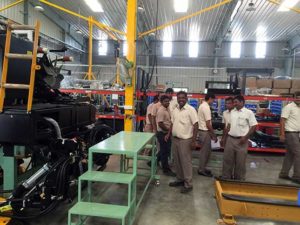 One might expect, with labor rates so low relative to somewhere like the U.S., as well as the infrastructure outside the company area being so different from the living conditions I’d seen in Europe and the States, that the workers would appear sub-standard. However, that was far from the case in all the different Roots factory locations I witnessed. Rather, the workforce seemed exceptionally professional and dedicated, clean and well-dressed for their jobs at hand. Safety gear was in evidence where needed and the factory floors and general appearance were orderly and very well-maintained.

Clearly, the company has developed well thought out systems for materials’ storage, transport and the like. Although not hurried, it was clear that much work was being accomplished by those around me. I also want to comment on the general attitude I witnessed while there: The atmosphere in the factory reflected the workings of a Team, with a capital ‘T.’ People seemed very happy to be there working and, to me, that’s the mark of a well-run organization. It was an insight into how the Roots organization has been able to become a worldwide powerhouse in several of its product fields.

Although Roots is just getting started with building street-class sweepers, already fixtures were in place for welding and assembly. These were developed to ensure quality control in the finished product, as well. The facility already had a paint assembly framework in place for its other machines being built in the same location.

As you may see from the photos, finished parts were hung on a conveyor system that transported them to wherever needed, as well as from the finishing area to paint and, subsequently, drying. Even though the Rosmech R6 regenerative air sweeper appears to be the largest machine the company has undertaken to date, there appeared to be no question that their build process would be successful. That, coupled with the substantial engineering team I’d been shown when I first arrived, seemed to indicate that the Roots Team would be able to accomplish its goals in building a quality road sweeper. 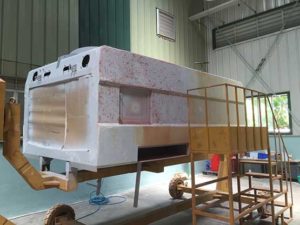 I was particularly intrigued by the large-scale device that had been designed to hold and move a completed hopper. It had been built so that the hopper could be maneuvered, while hanging in the air, to any position. The hand-crank apparatus allowed the hopper to be turned, spun around and/or angled in any manner needed by the workers.

Once all of the finish work was done to the hopper, the same apparatus could also be used to transport the hopper to the paint booth and then

on to where it would be assembled to the rest of the waiting sweeper components.

Another aspect of the Roots organization that was in evidence were the expansions going on at several places at their various locations. Clearly, this is a company on the move and advancing in the scope of its operations. This makes complete sense since Mr. Ramasamy’s son, Varun, is of the age where well-organized family businesses are able to do so. Varun, as well as the rest of the senior Roots’ managers I met, were professional in their bearing, well educated and seemed like they were on top of their areas of specialization. 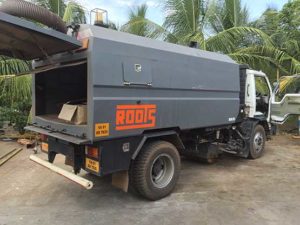 It will be interesting to track the impact that the Rosmech R6, the first Indian-built regenerative air sweeper, will have in the Australian marketplace. Success there will certainly be no slam dunk, since they’ll be going up against the well-heeled American public company, the Alamo Group, which is bound to be a worthy opponent. We’ll keep our readers apprised, from time-to-time, of what takes place in Australia as the two organizations collide in their shared mission to expand the percentage of regenerative air sweepers down under.

I asked someone to video us as I thanked my hosts. For extra credit, who in the video looks like they hail from the cool Pacific Northwest of the U.S. and which of the people look used to the climate…