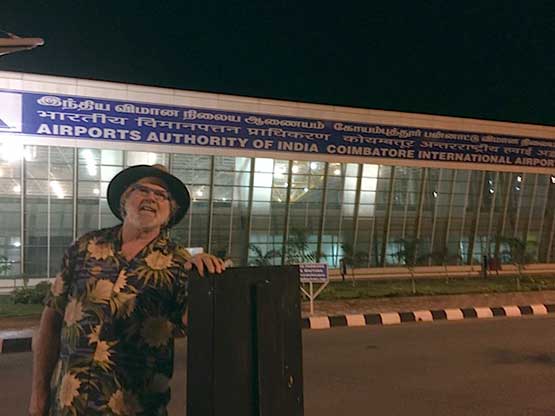 Arrival to the Start of our 2016 Odyssey in India

Ahhh… India; for me, always a land of mystery and intrigue. Malcolm and I exited Indian Customs with no problems, even though I still hadn’t eaten the apple I’d brought from home, which Malcolm had been shocked I’d brought even as far as Australia with its tough fruit and vegetable importation restrictions.

The Roots Multiclean organization had sent a car and driver to pick us up for transport to The Residency, a first-class hotel in Coimbatore where Malcolm typically stayed during his visits to Roots. This made for a completely relaxed ending to our 12 hours of flying over the previous 16-hour period. Even though it was night and a fairly short distance to The Residency, the first sights and sounds of India pierced into my consciousness.

EVERYTHING about my first taste of India seemed different to me, from the look of the shops along the road to the frenetic pace of the traffic that wove in and out of lanes. It appeared that the lines on the road were more of a recommendation to drivers than representing hard-and-fast rules that were to be obeyed. I was struck immediately by several different factors: Even though it was evening when we arrived, there was no lack of traffic on the road as well as along the streets. This makes sense since the heat of the day makes the nighttime hours the most bearable to be out and about.

I was also struck by the relatively poor condition of the buildings and surrounding landscape and – especially given the industry I’d come to document – couldn’t help but notice that there was litter and debris e-ve-ry-where my eyes lit. It was though I had been transported back in time to America’s 1950s era, when litter was simply thrown out of car windows as a method of disposal.

This was, though, a stark contrast to the beauty and class of our destination, The Residency Towers Hotel. Not only was it a beautiful facility, but the service surpassed anything I’d before seen. As we entered to check in we were greeted by several individuals, some of whom recognized Malcolm from his previous stays there.

Within a minute of being at the front desk a uniformed employee arrived with a tray containing a lime drink and a rolled up steaming towel for each of us. Later I would find that the hotel’s extensive buffet area was the most unusual and multi-dished of anywhere I’d yet stayed.

At the moment, though, the bed beckoned, especially since we were scheduled to meet with Roots’ top managers the next morning. I had long been looking forward to learning about the first Indian exporter of a regenerative air to Australia, a machine I’d already had a chance to see in action in Adelaide. Now, I would be able to learn about the building of the sweeper and the company and personnel behind it.