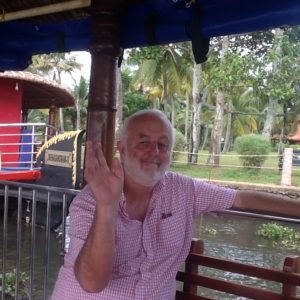 All of the following are terms I heard while in Australia, principally used by Malcolm Cameron, shown in the photo to the left. A few were also gleaned from other sources or overheard being said by others. Can you figure out what’s being said without looking below at the answers?

In Adelaide, I spotted a sign posted at the front of a house to alert passersby that water in use was coming from a bore hole. That  way, if a passerby saw them using water during the water restricted times in the summer they wouldn’t get turned in for their inappropriate water usage. Even though bore water is often very mineral-infused, in much of Australia potable water can be quite limited. As a result, some councils in dry areas will mix bore water with potable water for use in sweeper dust suppression as well as for washdown. Rosmech’s Colin Miller pointed out that bore water that had been used on one of their trade-in sweepers had corroded several areas of the chassis and sweeper metalwork.

This concludes the WorldSweeper 2016 Australian Odyssey. However, we invite you to use the ‘Next Communique’ link below and continue on to our next stop, which is the continuation of our 2016 Odyssey: Next we’re off to Southern India!