by Keith Chambers, with by Ranger Kidwell-Ross, Editor of WorldSweeper.com and Executive Director of the World Sweeping Association.

While at Civenex 2016, in Sydney, Australia, Ranger Kidwell-Ross conducted an interview with David Robartson, GM of Cleansweep, as well as Adam Eltringham, Cleansweep’s Workshop Manager. Cleansweep is based in Perth, in the Australian state of Western Australia. 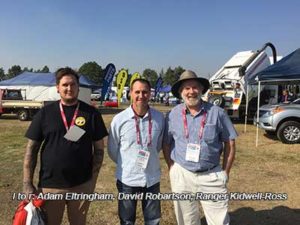 Robartson got into the business “by accident” as he put it — he heard about the job from his brother-in-law, who knew the Director of Cleansweep, who happened to be looking for an Operations Manager. Robartson’s background was in horticulture landscaping and some construction, so those were the first jobs he contracted as an Operations Manager. Within three months he was promoted to General Manager and has held that position ever since.

Cleansweep uses nine Johnston-605 sweepers as well as three sweepers developed by UK manufacturer Stock’s to cover the contracts they have within the state of Western Australia. All the sweepers Cleansweep owns are vacuum-assist broom sweepers. Although Robartson says he thinks regenerative air sweepers are good products, he doesn’t believe they are suited for the type of work Cleansweep does, which involves picking up sand as well as a lot of coarse materials in waterways and on roads that aren’t always maintained.

Cleansweep’s larger sweeping contracts require Cleansweep to keep their depots dust-free and tidy for environmental requirements. Sometimes these clients transport their products and have a habit of spilling the product and before it causes a major road accident we are required to clean up their spill of the roads ASAP.

Cleansweep also has a number of municipal contracts in Western Australia, including a tunnel on one of Australia’s freeways that’s a couple kilometers long, according to Robartson. Another group Robartson has worked with are civil contractors, who will call Cleansweep to sweep an area before they lay tar on the road or before curb lines are put down. No matter the group Cleansweep services, Robartson has noticed his business is somewhat weather dependent. “When there are high dust problems and a lot of sand blowing in Perth,” Robartson said, “We get a lot of calls. When the rain comes and there’s no wind, it’s not going to be too busy, so we don’t like the rain!”

Some clients Cleansweep works with import products. When one Industrial product in particular is transported/delivered there’s usually a Cleansweep sweeper cleaning it up because the product, if left on a roadway, can cause vehicular accidents. Cleansweep has become a reliable sweeping service in Western Australia because of the size of their fleet as well as their willingness to come to wherever the mess is. “We have a fairly large fleet for Perth,” Robartson said, “So we try and cover most of our clients pretty well immediately. A lot of those clients that batch the concrete end up spilling some on the road, so we pick up a lot of spill. When they call we’ll react immediately.”

Robartson said Cleansweep has a minimum two-hour call-out on weekdays, and a four hour call-out for weekend/after-hours services. Robartson has retrofitted all his sweepers with GPS software in order to know where his trucks are at all times. “We have certain clients that want that information at hand,” Robartson said. “We can give that; we can say, ‘Yes, we did go down your streets and we can plot it on the map for you!’”

The GPS software also communicates mileage and hours run for each machine, which is used to determine how close a sweeper is to a mechanical upgrade, which Cleansweep does in-house. This allows them to do tune-ups based on the amount of hours a vehicle has been on the road.

Adam Eltringham, shop manager at Cleansweep, has different classifications of mandatory mechanical services performed on sweepers to keep them going. As an example, a Class “A” tune-up is a change of oil, a change of filters and general maintenance. A Class “B” tune-up means a part on the sweeper needs to be replaced, in addition to all the services performed on a Class “A” tune-up. A Class “C” tune-up is when transmission and radiator fluids are replaced. And a Class “D” tune-up is, in the words of Eltringham, “Drain every fluid in the truck, pretty much, so it goes really deep… Everything, all-out!”

Eltringham believes if you spend the money to do preventive maintenance it will overall cost less than having someone else do repairs. With that in mind, his workshop consists of five mechanics who are skilled enough to not only do tune-ups and repairs but also have the materials and ability needed to fabricate parts, if that becomes necessary. “We can get parts,” Eltringham said, “But it’s a matter of time… if we’ve got to wait five days for a part, we normally just make it ourselves.”

broken. Cleansweep has standards laid out for shop cleanliness as well, which, Eltringham says, makes it a lot easier to find defects with the truck and get on with the service.

An operator needs a “Heavy Rigid” license (Australian equivalent to C.D.L.) in order to get in the vehicle. In ord 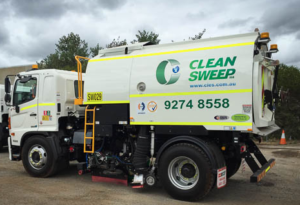 er to operate on civil construction sites, an operator needs to get a “Blue” or “White” card, just like every member of the construction crew. Another system Cleansweep has implemented is a series of pre-checks before a driver takes a sweeper on its daily runs for the shift. It takes about fifteen minutes and is designed to prevent mechanical breakdowns while a sweeper is on-site. “The last thing you want to do is go to a jobsite, and… ‘The sweeper doesn’t work right!’” Robartson said.

Drivers are also assigned their own truck and bay space in the yard. This helps prevent operators from blaming other operators for doing damage to their vehicle. Also, in case of a breakdown, it helps keep track of who has or hasn’t been doing their pre-checks.
Eltringham says that even though there are precautions in place around the shop, there’s a relaxed atmosphere at meetings, especially concerning any problems after daily runs. “Every day, like it’s general chit-chat between the guys, we do try to get along as more like a friend might than a work colleague, that kind of thing. We have a routine where we schedule getting all together, and we talk. Everything is discussed and we have learned that’s good for a workplace.”

SweepVac Australia is looking to expand their operations from Western Australia to the Australian state of Queensland. As they grow, they are hoping to see a growth in knowledge from the Australian government as far as standards are concerned.

“There are some fairly big-size contracting companies in Australia,” Robartson said, “and then you’ve got a lot of smaller guys that just don’t know how to operate. They sweep with their truck, and they just come for a little bit of work. We’d like to see the standard lifted, in terms of technology and professionalism. We’re trying to get the industry on a higher level; now, it can be known as a bit of a backyard business in Australia sometimes… An increase in the professionalism of power sweeping will improve sales for all manufacturers of brooms and parts as well as lift the standards throughout the industry!” 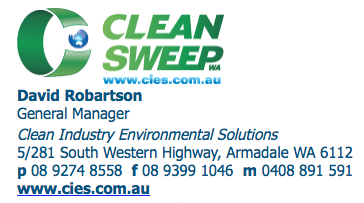