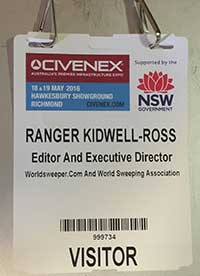 The Start of Australia’s Civenex 2016

Malcolm’s idea for me to arrive a day early was a good one: I awoke refreshed and ready to see what Australia’s Civenex Tradeshow had to offer. We’d spotted a coffee and pastry shop within walking distance from the hotel, so after taking a shower I headed over for a reminder of what coffee was like in Australia. I was glad my recollection was correct that it was served and brewed quite similarly to what I was used to in the U.S.

I was pleased to find the shop made their own pastries, especially so since that included a selection of different meat pies, that delicious item so prevalent in the U.K. and Australia but little seen in the U.S. It was absolutely fabulous and a choice I made the following morning, as well. Malcolm soon joined me and we talked about what to expect in the day to come. 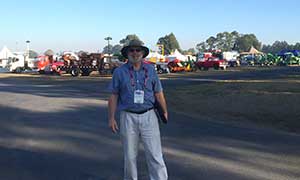 Even so, I was amazed at the size of the outdoor site of Civenex. Malcolm was savvy enough to gain us entrance where the equipment was loaded in, which provided a view of the vast field in which the show was being held. There were cranes and buckets sticking into the sky throughout the expanse, with plenty of other types of equipment to be seen in between. From a distance, the view of it all made me think I was entering a large carnival arena of some sort. 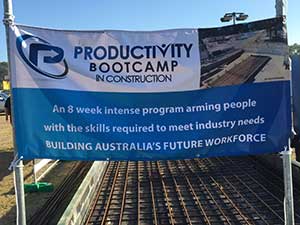 One of the first booths we came to advertised a boot camp for people wanting to enter the construction trades. Most readers who have hired supposedly knowledgeable new workers will no doubt agree about the wisdom of hiring someone who has been to such a school. As you can surmise by the photo to the right, it was an 8-week course that was all about knowing the ins and outs of becoming a construction-type employee who would know all the basics needed at a jobsite of that sort.

Australia appears to be quite forward-thinking in that area, as well as in many others, including using an outdoor venue for a large equipment show.

I had flown halfway around the world in the hope of seeing some different and new types of sweepers and related equipment, so I set off immediately to get started. Following are some of the results that occurred from the different vendors and others with whom I met and, in most cases, discussed power sweeping.

I’ll start with James Daniels, a principal in Applied Cleansing Solutions (ACS), since he and I had conversed via email occasionally for the last several years. James’ company is innovative in its product line and distribution, and he is someone who is as well versed in the sections of the industry his products span as he is a very competent spokesperson for everything ACS makes. The first video I did with James was a walkaround of the company’s litterMaster 9000. Click on the opening panel to view on this page or click here to see it about 2/3 larger directly at YouTube.com.

As I passed by the Hako Sweepers booth I got into a conversation with someone else who was taking a look at the sweepers. However, from his discussion with one of the salespeople I could tell he was a ‘regular.’
Indeed he was! Jason Wicking was a supervisor at Australia’s Liverpool Council, which owns three of the machines he’ll be discussing, the Hako Citymaster 1250. An interesting part of this machine is that different modules may be added to the basic Citymaster 1250 machine. Click on the opening panel below to view on this page or click here to see it about 2/3 larger directly at YouTube.com.

At the next stop I filmed a walkaround of a small walkbehind sweeper that has the added feature of being able to have a sulky attached to the rear. Your review of the features and benefits of the company’s model 125 machine is provided by salesperson, Rowan Homan. Click on the opening panel below to view on this page or click here to see it about 2/3 larger directly at YouTube.com.

I then caught up with Kristle Sue-See, who is a customer service and parts’ specialist for Schwarze Australia. Kristle will provide you with an overview of Schwarze Industries’ Australian customer service and support capabilities. Click on the opening panel below to view on this page or click here to see it about 2/3 larger directly at YouTube.com.

By this time it was getting quite warm outdoors so I ducked into the indoor portion of the Civenex showgrounds. I found that most all of it contained vendors that were not of interest to me, like software, engineering services, lighting choices and other products that needed only a 10×10 booth. However, I did want to catalog for our readers the quasi-governmental agency that occupied one of the booths, Local Government Procurement.

As explained by Michael Robinson, Acting GM of the organization, Local Government Procurement is a wholly-owned subsidiary of the government of New South Wales, Australia. They operate as a not-for-profit. The idea is achieve higher efficiencies and economies of scale in purchasing power for the government agencies within the region. Click on the opening panel below to view on this page or click here to see it about 2/3 larger directly at YouTube.com.

At that point our first day at Civenex was done. No question it was a great tradeshow in a very lovely outdoor setting, except for the occasional roar of a military plane taking off from the nearby runway. I was definitely excited about what I’d seen and looking forward to seeing some more sweepers and related equipment the next day. I hope you are, as well!